Graffiti artist Jean-Michel Basquiat is regarded as one of the world’s most successful street artists, and one of the most successful African-American artists. His career spanned barely 10 years but Jean-Michel Basquiat remains one of the most influential and important contemporary artists today. His street art-style paintings can fetch up to nine-figure sums and his collectors include Japanese billionaire Yusaku Maezawa and actors Leonardo DiCaprio and Johnny Depp. Here, we list Basquiat’s top-sold paintings at auction.
1.Untitled became the most expensive work by Basquiat to ever sell at auction came to Sotheby’s New York contemporary art evening auction in May 2017, far surpassing its pre-sale high estimate of $60 million. The landmark sale established the artist among the top echelon of auction blockbuster names when it sold for $110.5 million.
[addimg=6864]
2. Basquiat’s Untitled (Devil) sold at Christie’s in May 2016 for $57.3 million. Sold from the collection of Adam Lindemann, the billboard-sized image has been considered an iconic one for Basquiat collectors because it features the devil image that appears throughout much of Basquiat’s work.
[addimg=6865]
3. Dustheads will forever have an asterisk next to its sale price. It sold for$48.8 million.
[addimg=6866]
4. The sale of Flexible was a major moment for boutique auction house Phillips, which had struck an arrangement with Basquiat’s estate to sell works still held by his heirs, the artist’s two sisters. It sold for $45.3 million.
[addimg=6867]
5. The Field Next to the Other Road grew out of a period in which Basquiat began to rely heavily on skeletons, halos, and allegorical imagery. It is one of the few Basquiat paintings that depicts fully recognizable figures. Originally exhibited in a Galleria d’Arte Emilio Mazzoli show in 1981 and it sold for $37.1 million.
[addimg=6868]
6. In May 2017, prominent collector and hedge fund manager, Steven Cohen sold La Hara at Christie’s New York for $35 million, just above its $28 million high estimate.
[addimg=6869]
7. No Basquiat work with a crowned figure has ever sold for more than Untitled, which came up for auction in May 2014 at Christie’s. The work carried a pre-sale estimate of $20 million–30 million, and it went on to best that range, making $34.9 million with premium.
[addimg=6870]
8. Flesh and Spirit was first shown by the legendary dealer Tony Shafrazi in 1983 and is considered an exemplary Basquiat work, it sold for $30.7 million.
[addimg=6871]
9. In November 2013, another untitled work from 1982 sold in a Christie’s postwar and contemporary art evening sale, landing within its pre-sale estimate of $25 million–$35 million. It sold for $29.3 million.
[addimg=6872]
10. Selling in a Christie’s London contemporary evening sale in June 2013, this untitled diptych was the first of Basquiat’s paintings to set a record price for the artist in a European sale. It sold for $28.9 million.
[addimg=6873] 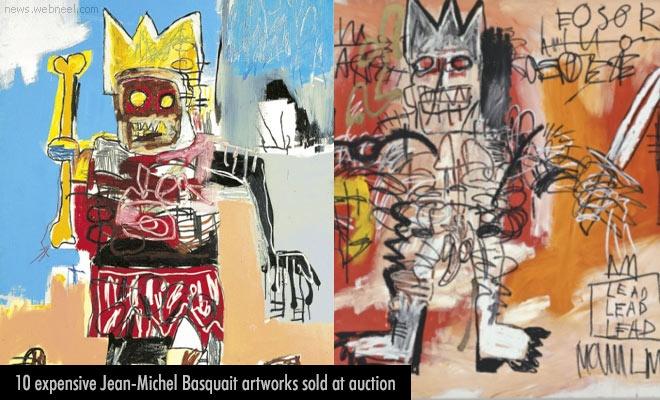