It’s fascinating to see this new creation!! Sophia the robot has worn several hats five years since she was activated by the Hong Kong-based Hanson Robotics. And having already established herself as an activist, a musician, and a fashionista, the humanoid robot is now a digital artist looking to cash into the internet's latest hysteria: NFT. Reuters reported that each of Sophia’s artwork will be linked to an NFT and will be up for auction early Wednesday (4.30 AM IST) on the digital art marketplace Nifty Gateway. This will be the world’s first sale of such pieces created jointly with artificial intelligence (AI). NFT is a digital signature authenticated by blockchain that certifies the ownership and originality of items. It has become the latest investment craze, with one digital artwork--a collage of 5,000 individual images by Beeple--selling for nearly $70 million earlier this month.
"I hope the people like my work, and the humans and I can collaborate in new and exciting ways going forward," said Sophia, who could be seen wearing a silver-coloured dress and holding a pencil in her hand.
On March 15, Hanson Robotics had announced that the humanoid robot had collaborated with 31-year-old Italian digital artist Andrea Bonaceto--known for colourful portraits--on several digital artworks.
“We use transformer networks and genetic algorithms in my art, and other kinds of computational creativity,” Sophia added. “My algorithms output unique patterns that never existed in the world before. So I think that the machines can be creative.”
The first piece that will be up for auction is called “Sophia Instantiation” and comes in the form of a 12-second MP4 file that shows the evolution of Bonaceto’s portrait into Sophia’s digital painting. It will also be accompanied by a physical artwork, painted by Sophia on a printout of her self-portrait. 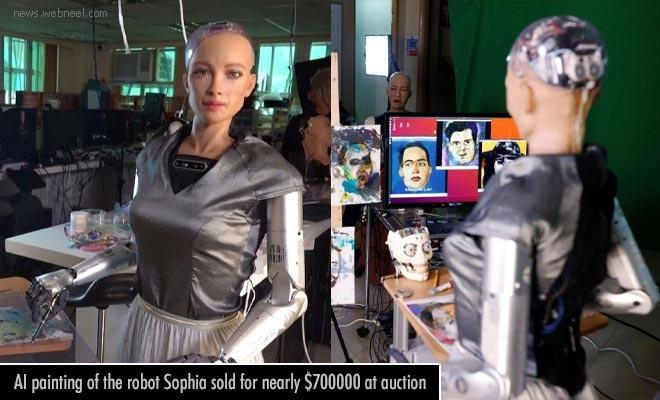